Primary brain tumors are tumors that originate in the brain. Brain tumors can be benign (non-cancerous) or malignant (cancerous). Benign brain tumors can grow and compress nearby structures of the brain but rarely spread into other parts of the body. Malignant brain tumors are likely to grow quickly and spread into other parts of the central nervous system including the spinal canal. There are several types of brain tumors, which include gliomas, meningiomas, pituitary adenomas, and nerve sheath tumors. These types of cancers originate in the brain, and are not to be confused with metastatic cancer. Metastatic cancer is one that has spread from the primary site of origin, or where it started, into different parts of the brain.

Signs and Symptons of Brain Tumors

General symptoms are related to the area of the brain that is affected and can include:

Helpful Terms Regarding Brain Tumors and the Central Nervous System

Treatment of choice for most gliomas is dependent on the location, grade of malignancy, and its histology. Treatment often includes a combined approach between surgery, radiation therapy, and sometimes chemotherapy. Surgical removal of the tumor is typically the first line of treatment with post-operative chemotherapy or radiation therapy depending on the findings from surgery.

Meningiomas can be initially observed if their growth is very slow. However for certain tumors that are growing and near critical structures (such as cranial nerves), earlier treatment may help preserve neurologic function. Tumors requiring treatment are typically treated with surgical removal and/or radiation therapy.

These tumors are mostly treated with medication but can also be surgically removed. Radiation therapy also can be used to treat these tumors. It is important that patients with these tumors are evaluated by an endocrinologist to correct any hormone abnormalities.

Metastatic brain cancers are tumors that have spread from another organ system in the body. These patients are considered Stage 4. These tumors are more common than primary brain tumors. Metastatic brain cancer most commonly originates from lung, breast, and melanoma. A majority of these patients present with multiple lesions throughout the brain and can be treated with surgery or radiation therapy.

Role of Radiation Therapy in Managing CNS and Brain Tumors 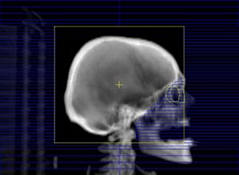 The image to the left shows the treatment field with MLC to protect healthy tissue.

Q: What are the side effects of radiation to the brain?

A: Patients can experience some hair loss which may be permanent. They can also have headaches and fatigue. Your physician may start you on a steroid medication to decrease the swelling in the brain during radiation. Long term, patients may experience mild to moderate temporary memory problems depending on what part of the brain receives radiation. Patients also occasionally experience transient taste changes. If you have seizures you may need to take anti-seizure medication.

Q: How do we know the tumor is being properly radiated?

A: We are able to use MRI images and fuse them with our planning CT images. This forms a map where we can outline exactly where the disease in the brain is located, allowing us to target the tumor precisely. We can also use this map to make sure critical structures in the brain do not receive too much radiation.

Q: What diet should I be on during radiation treatments?

A: There are usually no diet restrictions with radiation to the brain.